Eye Movement Analysis Can Provide Insight into AD and MCI 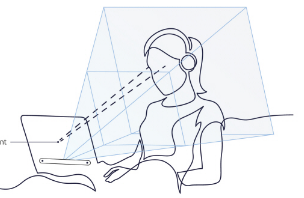 An accumulation of evidence indicates that patients in the early stages of Alzheimer’s disease (AD) show subtle changes in cognition that traditional assessments may miss.

Several factors complicate such a timely diagnosis. Symptoms such as transient memory loss may become more marked but also may reconcile of their own accord. Related, patients in the early stages of the disease often demonstrate few functional differences from those without the condition.

Early identification of patients who are most likely to progress from mild cognitive impairment (MCI) to Alzheimer’s disease and dementia would allow for care provision that could slow or prevent disease progression before permanent alterations in brain chemistry have taken hold.

A study that appeared in the journal Aging in August 2019 reports that abnormalities in saccadic eye movements may offer a clinical biomarker with which to distinguish among subtypes of MCI and to identify those MCI patients whose disease is most likely to progress to Alzheimer’s.

The work the authors share represents a collaboration between Loughborough University, Trinity College, the University of Manchester and other institutions. It is also to the authors’ knowledge the first work to investigate potential associations between eye movement performance and MCI subtypes.

Alzheimer’s disease is a progressive, neurodegenerative condition for which there is at this time no cure. There are, however, treatments that can temporarily ameliorate symptoms or slow disease progression.

For the effective application of both current therapies and a final curative measure in the future, it is essential to be able to identify the patients who are most likely to benefit. This must happen before the disease has resulted in intractable pathological alterations.

Data show that those with MCI are more likely to develop Alzheimer’s than those without it, but the association does not apply to all kinds of MCI. Patients with amnesiac MCI, or aMCI, have memory loss, whereas those with non-amnesiac MCI, or naMCI, have other impairments in domains besides memory. It is the aMCI subtype that is associated with dementia and Alzheimer’s disease.

Eye movement measures may offer a non-invasive, cost-effective way to distinguish these patients from one another.

The participants were asked to perform simple “anti-saccade” eye movement tasks that consisted of looking at or away from an on-screen stimulus. The data demonstrate two key findings: Performance differentiated those with naMCI from those with aMCI, and those with aMCI showed eye movement patterns that strongly resembled those of Alzheimer’s patients.

The study at hand adds important diagnostic considerations for MCI and Alzheimer’s disease. Eye-tracking may offer a key biomarker of dementia, which may vastly improve disease prevention and management.